The RUB Code collection is a series of programs used to (1) assemble the RUB Corpus and (2) conduct a Russian-language, lexicon-based, sentiment analysis upon the RUB Corpus.

All the Code programs are writtin in python.

The sentiment analysis uses a modified version of the lexicon created by Loukachevitch & Levchik (2016).

This page describes two different groups of programs, which make up the RUB Code.

The RUB code was used to assemble the RUB Corpus and perform a lexicon-based, sentiment analysis.

The RUB Corpus was gathered using web crawling and scraping programs. Crawling is the repetitive process of accessing a webpage and inspecting its contents. Scraping is the automated gathering of data from the internet (Mitchell, 2015, pp. 31, viii).

For an introduction to Russian-language sentiment analysis, see the excellent paper by Vīksna & Jēkabsons (2018).

After this introduction and a short “Disclaimer” (below), the RUB Code can be found under “Downloads” in the “Code Download” section.

Under the table of downloadable code, there is some further explanation of how this code was designed.

The “Crawling/Scraping Programs” section explains how the crawling and scraping code was designed.

The author of the code learnt how to use the coding languages as he wrote them. Therefore, some of the code is illogically structured and inefficient.

If you feel compelled to alert the author of any fatal errors in the RUB Code, please scroll down to the “Contact” heading for details on how to get in touch.

To use any of the RUB Code scripts, please use the following citation:

The various scripts contain multiple notes and comments, which are intended to make the code easier to understand.

All the scripts uploaded here begin with a strandard file header, and then a comment block of four headings:

For descriptions about how the scripts work, please read the information under the “Crawling/Scraping Programs” and “Sentiment Analysis Programs” headings below.

Regular expressions, a notation used to find and identify text (Friedl, 2006, p. 1), are also included in these programs to filter webpage contents and increase accuracy.

Under each crawling/scraping program function, there is (or should be) a short description of its use. In some cases, there are comments explaining the purpose of certain variables, regular expressions, or filters contained within the functions.

The crawling and scraping programs were designed with one guiding prinicple: to gather (as accurately as possible) only the words spoken by the policymaker/s in question.

This form of data acquisition is the first step of the sentiment analysis pipeline. The more accurate it is, the more effective the later preprocessing and sategorisation steps can be.

It should be noted that crawling and scraping programs often need to be tailor-made for each website they encounter.

After the texts are scaped, the second and third steps in the sentiment analysis pipeline can proceed.

The second step is data preprocessing. Preprocessing involves a series of data handling procedures to make a text meaningful for a given sentiment analysis program.

The third step is the categorisation process. Categorisation, also called classification, is the automated process of identifying opinions in text and deciding their sentiment. This is essentially the “analysis” part of sentiment analysis.

The sentiment analysis programs are also written in Python 3.7.1 (Van Rossum & Drake, 2018), but with an occasional need to interact with JSON APIs (servers that communiate with other systems using JavaScript Object Notation language).

The programs (downloadable above) that make up the second and third sentiment analysis pipeline steps are explained in more detail in the “Data Handling (Preprocessing) Tasks” and “Sentiment Analysis Tasks” subsections below.

The following subsection describes how the RUB Code prepares the scraped texts for analysis.

This RUB project preprocesses collected texts for sentence level analysis (see the speech_to_sentence.py script above). “Level” is the scope at which to conduct sentiment analysis upon a text. Sentence level preprocessing breaks a given text into sentence-sized units.

All text levels of analysis are problematic (Liu, 2015). Considerations of simplicity, necessity, and accuracy dictate the use of sentence level analysis for the RUB project.

The sentence level (while it is essentially a miniaturised version of a larger text) means the unit of analysis is not too large to be meaningless, and not too specific to complicate the classification process.

Most importantly, analysis of two test datasets built by Rubtsova (2015) at the sentence level has produced acceptable accuracy results.

Sentiment analysis accuracy is generally calculated using precision, recall, and F1 scores (Sarkar, 2019, pp. 200–204). Precision measures the proportion of correct versus false-positive sentiment predictions. Recall measures the proportion of correct versus false-negative predictions. F1 score is the main accuracy indicator, which is the harmonic mean of the two precision and recall measures.

Below are the accuracy test scores produced by the RUB Code. An acceptable F1 score is considered to be around 70 percent (Schmidt & Burghardt, 2018, p. 146). The F1 scores at the sentence level are 78.699248 percent and 83.9956279 percent for respective positive and negative sentiment test datasets.

Once the sentence level is decided upon, the core preprocessing jobs can begin (see the preprocess_2020.py script in the listed downloads above).

Structuring refers to how the data is organised for analysis. The RUB Code tracks opinion changes over time. Thus, the data is structured for longitudinal analysis: it is arranged according to the date a speech was made or a policymaker was quoted.

Cleaning (also referred to as “scrubbing”) removes all non-sentiment-bearing elements from a sentence. Non-sentiment bearing elements include punctuation and “stop-words,” which are words that contain no sentiment, such as “when,” “this,” “that,” “after,” and so on.

The RUB Code includes text replacement. This substitutes emoticons (text representations of facial expressions, such as “:-)” and “:-(” communicating emotion), certain slang words, and other informal sentiment-bearing expressions (such as “hooray” and “boo”) with a simple equivalent word, such as “good” or “bad.”

Next, the sentences are spell-checked. The RUB Code runs a simple Russian language automatic spellchecker using the Yandex Speller API (Seleznev, 2015). Yandex is a popular Russian-language search engine, like Google.

The RUB Code then performs tokenisation. Tokenisation breaks a sentence into units that are easier for a lexicon to analyse. Individual words are called tokens, and collections of words are referred to as “n-grams” (referring to a contiguous sequence of n items in a series).

The final preprocessing task is lemmatisation. Each token is reduced to its linguistic root. For example, “walking” becomes “walk,” and “better” becomes “good,” and so on. To perform this complex function, the RUB Code employs the pymystem3 lemmatisation package (Sukhonin, 2018), which is (again) based on software developed at Yandex (Segalovich, 2003).

At this point, the texts are ready for sentiment analysis.

The RUB Code sentiment analysis is a function of two parts: the RuSentiLex Lexicon (a dictionary of sentiment bearing words and their corresponding sentiments; see the rusentilex_2020.txt file in the downloads table above) and an algorithm (a series of mathematical rules to decide the sentiment for each sentence processed; see the saTagProcessor_2020.py and tagProcessor_lib_2020.py scripts also in the downloads table above). 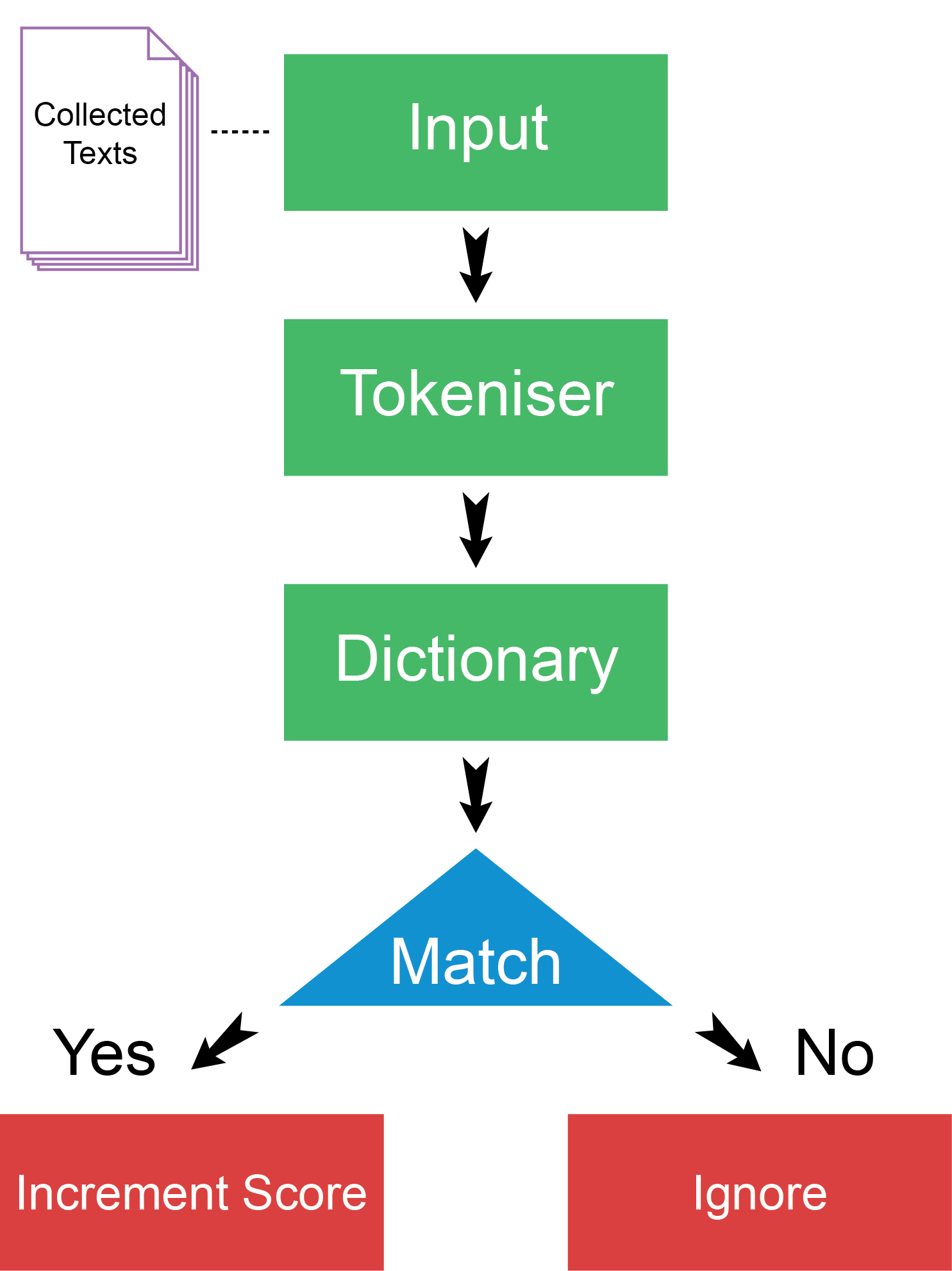 The “Collected Texts” are assembled by the crawler/scrapers (discussed in the “Crawling/Scraping Programs” section above). The “Input” and “Tokeniser” stages equate to the preprocessing steps descibed in “Data Handling (Preprocessing) Tasks” directly above. The “Dictionary” (lexicon) and “Match” (algorithm) stages decide the sentiment of sentences. The result (in the case of RuSentiLex) “scores” one of four possible sentiments: positive, negative, neutral, or ambiguous. Sentences that cannot be matched are “ignored.”

The RUB Code uses a modified RuSentiLex lexicon. RuSentiLex was originally designed to test if a word or phrase with multiple connotations was used to express a fact, opinion, or personal feeling (Loukachevitch & Levchik, 2016, pp. 1172–1173). The author of the RUB Code was unable to harness this feature. Therefore, this inaccessible element is removed from the lexicon used here.

The modified version still contains sentiment orientations for all the “more than 12 thousand words and phrases,” which are the core of the RuSentiLex dictionary (Loukachevitch & Levchik, 2017).

The RUB Code algorithm functions in two stages. The first stage is a calculation to find the averages of sentiments in the sentence. The highest average sentiment (positive, negative, neutral, or ambiguous) determines the sentiment of the sentence.

The aim is that only sentences clearly displaying a particular sentiment are labelled as such.

The RUB Code sentiment analysis is crude. But the algorithm has proven effective at identifying positive or negative sentiment sentences in Rubtsova’s (2015) large test datasets.

The following image is a confusion matrix, which provides more detail on the accuracy of the RUB Code’s sentiment anlaysis: 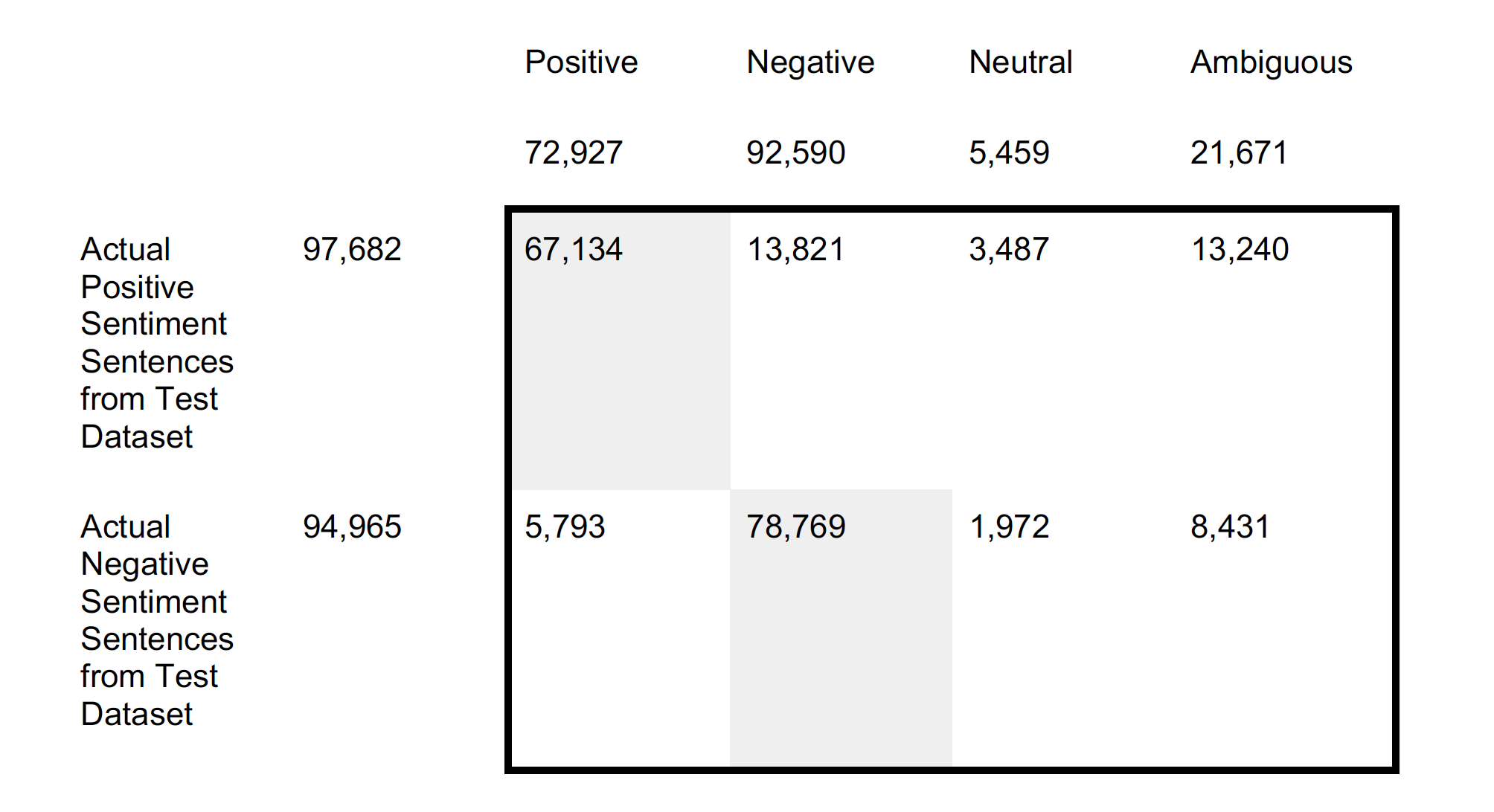 The far left-side of the matrix shows the number of sentences in the positive and negative test datasets. “Actual Positive Sentiment Sentences from Test Dataset” indicates there are 97,682 positive sentences. “Actual Negative Sentiment Sentences from Test Dataset” points to 94,965 negative sentences. At the top of the matrix, “Predicted Sentiment Using RuSentiLex with Emoticons” shows the total number of sentences coded by the RUB Code. Each RuSentiLex sentiment has its own cell heading. The RUB Code categorised 72,927 as positive, 92,590 as negative, 5,459 as neutral, and 21,671 as ambiguous for both test datasets. The interior of the confusion matrix (identifiable by the thick, black border surrounding it) separates categorisation results for the two different test datasets. The boxes coloured light-grey indicate accurate classifications (the number of sentences given the correct sentiment). Because there are only positive sentiment and a negative sentiment test datasets, there are only two light-grey boxes. The uncoloured, white boxes tally the SA program’s errors: the false positives and false negatives.

Unfortunately, there are no open source, Russian-language datasets to test neutral or ambiguous sentiment. Therefore, the RUB Code’s ability to predict sentiments has not been tested.

While this is a limitation, the RUB Code is still fit-for-purpose to track policymaker sentiment. The code can adequately discern between positive and negative sentiment (with F1 scores of 78 and 83 percent respectively). This handles the fundamental task of deciding whether policymakers are for or against an issue. Ambiguity and neutrality are, arguably, less important to when trying to discover policymaker positions.

For any issues with the RUB Corpus and Code repositories, please use GitHub.

For general questions about this project or any ideas for academic collaboration, contact Peter Braga at: pjbraga.rubcc@gmail.com.

Segalovich, I. (2003). A Fast Morphological Algorithm with Unknown Word Guessing Induced by a Dictionary for a Web Search Engine. MLMTA, 273–280. Available at: https://dblp.uni-trier.de/db/conf/mlmta/mlmta2003.html.